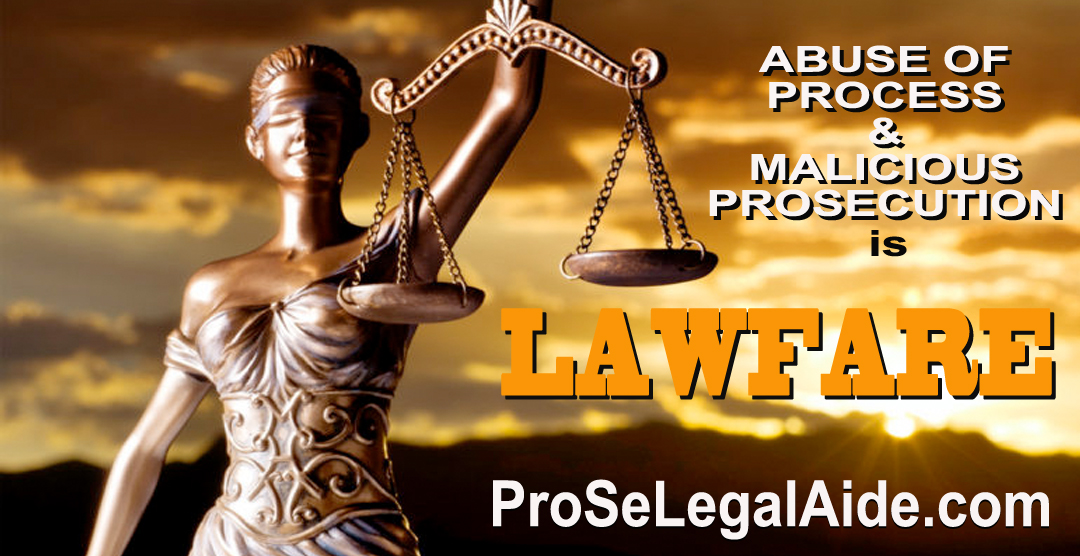 Lawfare is Used Against We The People, Not Simply Nation-States

‘Lawfare’ was defined by Charles J. Dunlap, Jr. in 2001 for Harvard’s Carr Center, as “the exploitation of real, perceived, or even orchestrated incidents . . . employed as an unconventional means of confronting” a superior power. Typically used in military circles, the lawfare reasonably and justifiably extends to corrupt court officers abusing their licenses to damage adversaries, typically citizen targets, by fraud and crime. This extreme abuse of process, or malicious prosecution, subverts the superior force of truth, damaging parties armed with the truth.

Criminal lawfare is characterized by lawyers’ abuse of process to accomplish theft by fraud. This includes the use of frivolous, fraudulent, and reckless arguing, or filing false documents in ‘bad faith’ in courts to commit theft, or damage or deprive parties of their rights and/or property.

Commonly overlooked in lawfare is the unconscionable abuse of power by complicit co-conspirators, court officers, and/or corrupt judges. Together these menaces to society form a ‘Judicial Racket’ depriving human rights, property rights, fair trials, and justice. This is the main way litigation victims are stressed and distressed, society-at-large is damaged, freedom and democracy restricted, and the economy involving citizens and small businesses is devastated in the United States.

This lawfare and corrupt prejudice is so deep seated in American jurisprudence (according to Dr. Horowitz and the introduction to ProSeLegalAide.com service), that it has become institutionalized and damagingly neglected.

Lawfare begins by the imposition of division between civil and criminal law and proceedings. This arbitrary and capricious division monopolizes and centralizes the administration of justice in an elite Bar community, and deprives citizens of their public duty(ies) to defend self and society against criminals and the damage they cause. This contributes to lawfare by protecting, or ‘safe-harboring,’ licensed lawyers who abuse process or maliciously prosecute citizens, precluding criminal law enforcement, thus prejudicing individuals and society in favor of the racketeering enterprise that violates anti-trust provisions in law.

The separation of civil from criminal proceedings assures the Judicial Racket’s control over corrupted commerce, much like the mafia controlled organized crime in America. This endemic corruption devastates the economy and free trade favoring multi-national corporations over citizens unable to withstand the stresses and strains, costs and damages of lawfare.

It was for this reason that ProSeLegalAide.com was developed for use as a defensive weapon against racketeering enterprises and those who abuse and corrupt the courts to commit fraud, theft, and other crimes. The U.S. Congress opposed this imposition by the passage of 42 U.S.C 1988, the Private Attorney Generals Act. That law encourages citizens to oppose organized crime by deputizing citizens as criminal prosecutors opposing rackets in defense of justice.

From Wikipedia, the free encyclopedia

Jump to navigation Jump to search

Lawfare is a form of war consisting of the use of the legal system against an enemy, such as by damaging or delegitimizing them, tying up their time or winning a public relations victory.[1][2] The term is a portmanteau of the words law and warfare.

Origin of the term

Perhaps the first use of the term “lawfare” was in the 1975 manuscript Whither Goeth the Law, which argues that the Western legal system has become overly contentious and utilitarian as compared to the more humanitarian, norm-based Eastern system.[clarification needed][3]

A more frequently cited use of the term was Charles J. Dunlap, Jr.‘s 2001 essay authored for Harvard’s Carr Center.[3] In that essay, Dunlap defines lawfare as “the use of law as a weapon of war”.[4] He later expanded on the definition, explaining lawfare was “the exploitation of real, perceived, or even orchestrated incidents of law-of-war violations being employed as an unconventional means of confronting” a superior military power.[5]

Lawfare may involve the law of a nation turned against its own officials, but more recently it has been associated with the spread of universal jurisdiction, that is, one nation or an international organization hosted by that nation reaching out to seize and prosecute officials of another.[6]

Whether lawfare is a positive or negative term

Colonel Charles Dunlap describes lawfare as “a method of warfare where law is used as a means of realizing a military objective”.[7] In this sense lawfare may be a more humane substitute for military conflict. Colonel Dunlap considers lawfare overall a “cynical manipulation of the rule of law and the humanitarian values it represents”.[7]

Benjamin Wittes, Robert Chesney, and Jack Goldsmith employed the word in the name of the Lawfare Blog, which focuses on national security law and which has explored the term and the debate over what lawfare means and whether it should be considered exclusively a pejorative. (See: Welcome to Lawfare, By Benjamin Wittes. Wednesday, September 1, 2010; also see: About Lawfare: A Brief History of the Term and the Site, at: https://www.lawfareblog.com/about-lawfare-brief-history-term-and-site.)

Benjamin Wittes, a senior fellow at the Brookings Institution, has argued that lawfare should not have only a negative connotation, but that it also refers to the sharply contested legal debates in the U.S. surrounding national security, and national security law. Wittes writes, “The name Lawfare refers both to the use of law as a weapon of conflict and, perhaps more importantly, to the depressing reality that America remains at war with itself over the law governing its warfare with others.”[8]

The Lawfare Project argues lawfare is exclusively negative, defining it as “the abuse of Western laws and judicial systems to achieve strategic military or political ends”.[9] From this perspective, lawfare consists of “the negative manipulation of international and national human rights laws to accomplish purposes other than, or contrary to, those for which they were originally enacted”.[9]

In a 2010 speech on the topic, Lawfare Project Director Brooke Goldstein elaborated:

… lawfare is about more than just delegitimizing a state’s right to defend itself; it is about the abuse of the law and our judicial systems to undermine the very principles they stands for: the rule of law, the sanctity of innocent human life, and the right to free speech. Lawfare is not something in which persons engage in the pursuit of justice; it is a negative undertaking and must be defined as such to have any real meaning. Otherwise, we risk diluting the phenomenon and feeding the inability to distinguish between what is the correct application of the law, on the one hand, and what is lawfare, on the other. Because that is the essence of the issue here, how do we distinguish between that which constitutes a constructive, legitimate legal battle (even if the legal battle is against us and inconvenient) from that which is a counterproductive perversion of the law, which should be allocated no precedent? The delineation is not as simple as some may like to make it; that is, that lawsuits against terrorists are good, and legal actions against the U.S. and Israel are bad. Now, the question is not “who is the target”, but “what is the intention” behind the legal action: is it to pursue justice, to apply the law in the interests of freedom and democracy, or is the intent to undermine the system of laws being manipulated?[10]

The NGO Forum of the 2001 Durban Conference called for the “establishment of a war crimes tribunal” against Israel. NGOs have used universal jurisdiction statutes in Europe and North America to bring forward such cases. These statutes allow courts to preside over cases in which one or more of the parties (or events at issue) are foreign. In some countries, such as Spain, an NGO can apply to a court directly for an arrest warrant or to launch a criminal investigation without the knowledge or approval of the government.[11] Many cases have been brought forward against Israeli officials and those associated with Israel’s military, accusing them of war crimes. These cases have been heard in both Israel[12] and in other countries.[13]

US Ambassador John R. Bolton has characterized Palestinian attempts to seek UN recognition for a state as “lawfare”, because he sees those attempts as delegitimizing Israel.[14]

Some supporters of Israel, such as Shurat HaDin (Israeli Law Centre), have been accused of using “lawfare” to get authorities to seize activist ships bound for Gaza (known as the “Gaza flotilla“).[15]

Joshua Mintz, writing in The Jerusalem Post in September 2011, referring to the Israel fears of lawfare, says, “it’s quite possible that Israel, at least within the legal landscape, may actually benefit from the Palestinian statehood bid.”[17] Douglas Bloomfield writes that “Palestinian lawfare against Israel could further isolate the Jewish state” as well as raise issues regarding overseas travel for Israeli leaders who might fear arrest on war crimes charges. In addition, Bloomfield suggested “if Abbas goes ahead with waging lawfare, he will open a new stage in the conflict that is likely to set back the cause of peace.”[18]

Other examples of lawfare

The Wall Street Journal said in an editorial, regarding the Padilla case, “the lawyers suing for Padilla aren’t interested in justice. They’re practicing ‘lawfare,’ which is an effort to undermine the war on terror by making U.S. officials afraid to pursue it for fear of personal liability.” Padilla was arrested in 2002 for planning to carry out a terror attack within the United States, was convicted and sentenced to prison, but has continued his legal battle via the ACLU and the National Litigation Project at Yale Law School, and his case has been ruled on numerous times.[19]

A notable US official cited in connection with asserted lawfare is Henry Kissinger. Dr. Kissinger faced questioning and possible prosecution in France, again in Brazil, and then in England (the latter initiated by Spanish magistrate Baltasar Garzón) because of Kissinger’s involvement as a Nixon Administration official with Operation Condor. Kissinger subsequently opined that universal jurisdiction risks “substituting the tyranny of judges for that of governments”.[20]

Harvard law professor Jack Goldsmith, known for his scholarship voicing opposition to the expansion of international human rights and universal jurisdiction, reveals in his book The Terror Presidency that Defense Secretary Donald Rumsfeld was concerned with the possibility of lawfare waged against Bush administration officials, and that Rumsfeld “could expect to be on top of the list”.[21][22] Rumsfeld addresses the effects of lawfare in his memoir Known and Unknown.[23]

Questions remain unresolved of the possibility of lawfare-type prosecution in Italy[24] and Germany[25] of CIA agents involved in international abduction known as extraordinary rendition by the United States, and in Spain before Magistrate Garzón of the Bush Six, American attorneys who created what The New York Times called “the legal framework to justify the torture of prisoners at Guantanamo Bay”.[26]

According to June Teufel Dreyer, an example of lawfare are the activities of the People’s Republic of China in the dispute of maritime borders with several Association of Southeast Asian Nations nations.[27]

An opinion piece in the New York Daily News asserts that the United States is already dealing with “a variety of lawfare stratagems”. In New York, anyone who reports an event as part of the “If You See Something, Say Something™” public awareness campaign is “protected from frivolous lawsuits” by the “Freedom to Report Terrorism Act”, and journalists and authors who report on terrorism are protected from lawsuits by the “Libel Terrorism Protection Act”, as well.[28]

Lawfare Against We The People

Stress and Distress Caused by Lawfare

War On We The People: Introducing WarOnWeThePeople.com by Dr. Leonard Horowitz and Sherri Kane