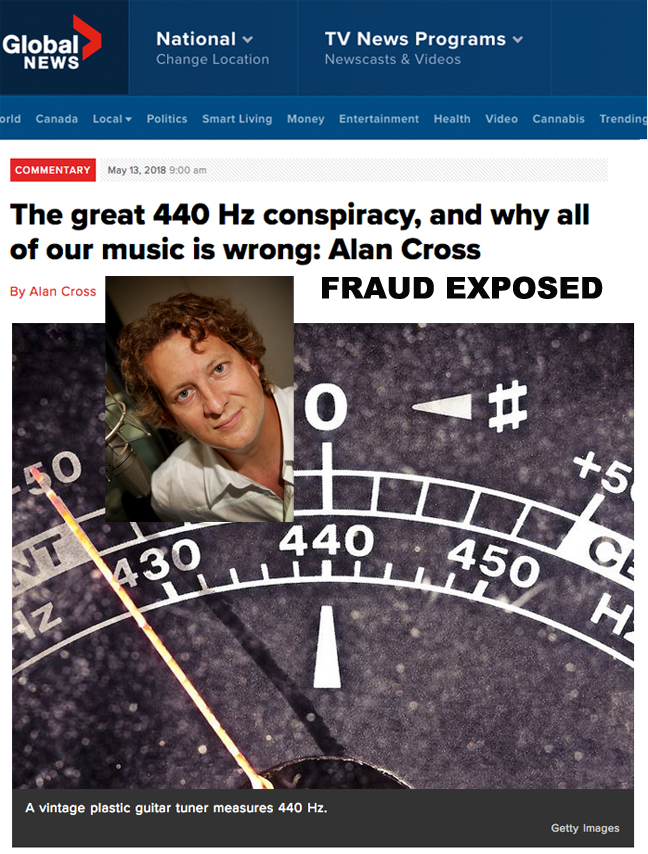 Author Alan Cross Exposes Himself and His Corporate Thugs as Frauds by Omitting Musical Instrument Tuning Facts and Misrepresenting “The Great 440 Hz Conspiracy” to Divert From and Discredit A=444Hz/C=528Hz Healing Frequency that Big Pharma and Cross’s Corporate Controlled Media Works to Conceal and Smear.

It was yours truly that broke that “thought control” story in the most popular article published on this topic that Cross quotes from, yet purposely conceals. Here is the LINK to the “Musical Cult Control” article published in Medical Veritas journal online.

“If musical performances were to sound the same the world over, some standardization was required. As early as 1885, the Music Commission of the Italian Government declared that all instruments and orchestras should use a tuning fork that vibrated at 440 Hz, which was different from the original standard of 435 Hz and the competing 432 Hz used in France.”

Again, Cross gives us no primary citation for inspection, and instantly diverts to “432Hz used in France.” Cross purposely avoided any discussion of A=444Hz that was the generally-accepted frequency of musical tuning used throughout Europe as discussed by the most esteemed authority in this field, Llewelyn S. Lloyd. Lloyd, with Achille Fould, argued in favor of A=444Hz in their quintessential article on this topic published in the Journal of the Royal Society of Arts Vol. 98, No. 4810 (16th DECEMBER, 1949), pp. 74-89.

According to Cross, the “Adherents to this [432Hz superiority] theory claim that a more ‘natural’ frequency for middle ‘A’ is 438 Hz.” Frankly, I never heard of this purported group of “Adherents,” but it is a great diversion.

“Others believe that the correct middle ‘A’ is 432 Hz (also known as Verdi’s A) because it has ‘a pure tone of math fundamental to nature’ and is ‘mathematically consistent with the patterns of the universe, vibrating with Phi, the Golden Ratio. They point to how this pitch can be connected to everything from nautilus shells to the works of the ancients, including the construction of the Great Pyramid.”

Cross’s “Double Cross” is reflected in this exclusive promotion of A=432Hz, while recklessly neglecting the same wonderful things can be said of 432’s harmonic C(5)=528Hz as mathematician Victor Showell showed us well in the diagram below, as further explained HERE. 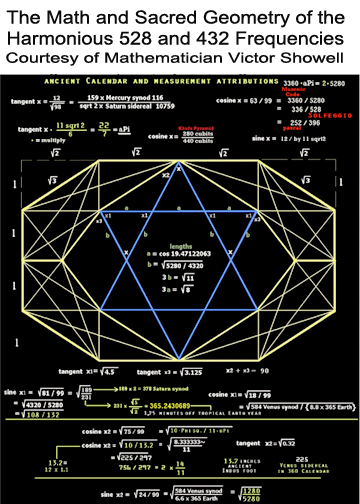 Then there is a false statement that Cross makes by writing, “Furthermore, 432 Hz resonates with 8 Hz (the Schumann Resonance), the documented fundamental electromagnetic “beat” of Earth. It just feels better.”

What do you get when you tune your radio one-tenth of a Hz higher or lower from Alan Cross’s radio show, The Edge? STATIC–No clear broadcast what-so-ever.

And that static is a hell of a lot better than hearing mind-controlling crap and distressing music this industry-protection-agent and Big Pharmawhore broadcasts. Here, Cross equates 7.83 Hz to 8 Hz, that would generate nearly twice the static. But gullible people buy Cross’s crap.

The fact is, anyone could make the same false and stupid claim about 528 being close to the Shumann Resonance frequency peak of 33.8, because 33Hz is a lower octave of 528. But no one I know is as stupid and deceptive as Alan Cross for publishing such falsehoods.

Alternatively, if you want to see how someone with integrity sells the idea of the these two frequencies working together to benefit civilization, 528 and the 7.83Hz Schumann Resonance frequency, click HERE.

“Research says that music tuned from this [432Hz] frequency is easier to listen to, brighter, clearer, and contains more inherent dynamic range,” Cross boasts in favor of his fraud. “As a result, music with this tuning need not be played at higher volumes and thus reduces the risk of hearing damage.” What CRAP! Two misrepresentations in two sentences. 432 is less bright than A=444Hz tuning first of all. And there are many musicians who feel that A=440Hz is “brighter” and “clearer” than the duller 432Hz frequency that is duller simply because it vibrates less. A=440Hz vibrates 8 cycles-per-second more than A=432Hz. So that, Mr. Cross, is an asinine statement. And secondly, “music with this tuning need not be played at higher volumes” is a totally outrageous claim. Volume of music and frequency of music has little-to-nothing in common in this case. People set their volume control as desired, not because the recording is made in different frequencies, but because broadcasts and recordings are often made at different volumes. So audiophiles simply adjust their volume controls as desired.

“The more radical among middle “A” haters insist that the true frequency should be 528 Hz because it’s a “digital bio-holographic precipitation crystallization [and] miraculous manifestation of diving frequency vibrations.” I have no idea what that means.

Alan Cross feigns being confused. Any such “confusion” is his own reckless and malicious intent to disparage 528Hz. First, the page he links to does not contain that quote. Second, he alters the quote to hash the intelligence. The word “diving” is substituted for the word “divine.” “Divine frequency vibration” is the actual claim. And if Cross had read The Book of 528: Prosperity Key of LOVE, he would have learned why I call a human being a
bio-holographic preciptitation, crystallization [and] miraculous manifestation of divine frequency vibrations,” including 528 and 432Hz, along with the rest of the Solfeggio scale, 396. 417, 639, 741, 852, and the rest of the “Perfect Circle of SoundTM” frequencies 963, 174 and 285. Here is what the “Perfect Circle of SoundTM” looks like in my trademarked logo. 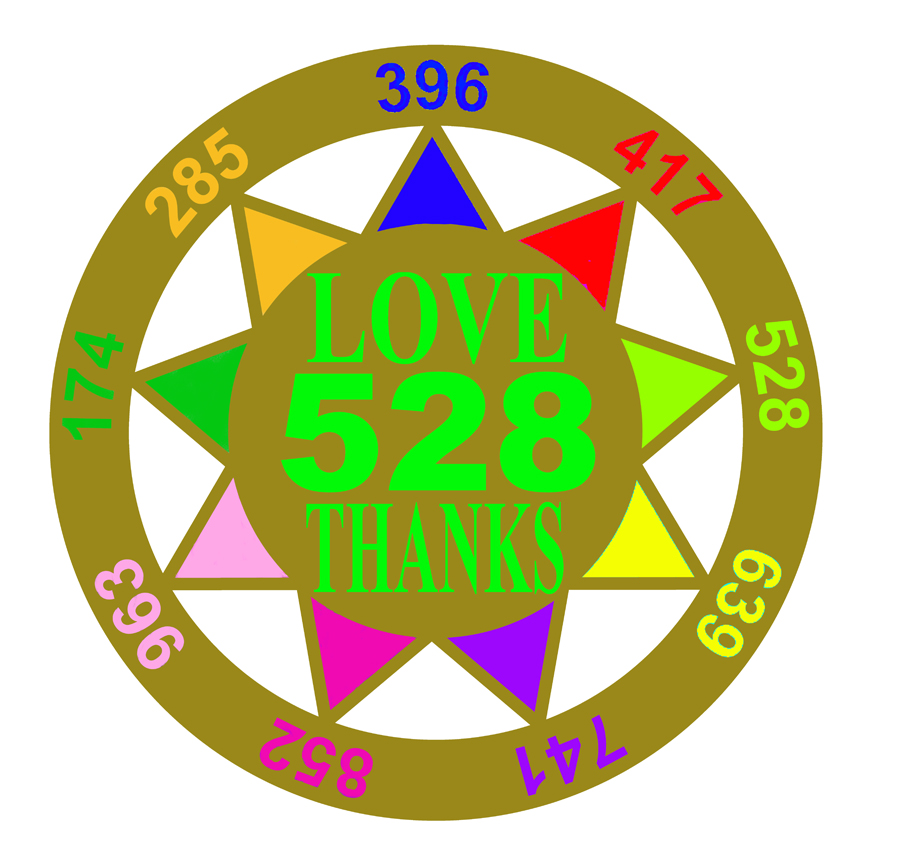 “Here’s where the conspiracy comes in,” Alan Cross continues. “There is allegedly something sinister and evil about 440 Hz. It is said that the Rockefeller Foundation had an interest in making sure the United States adopted the 440 Hz standard in 1935 as part of a ‘war on consciousness’ leading to ‘musical cult control.'”

“Musical Cult Control” is the name of my very popular article published in Medical Veritas journal online. Cross’s co-conspirators HATE that article. They hate the widespread damage the truth revealed is causing to their monopoly over the music industry and healthcare. You see Alan Cross conceals my name as the pioneer/instigator of this conspiracy controversy. And you also see that Cross concealed the link to the original source article. (That article, at the time of this writing, is in the process of being restored after multiple hacks and security breaches caused it to be CENSORED.) What does the U.S. Supreme Court in United States ex rel. Bilokumsky v. Tod, 263 US 149, 154 (1923) say about such “silence” and censorship?  Cross’s “[c]onduct which forms a basis for inference is evidence” of a conspiracy and racketeering enterprise engaged in consumer fraud and unfair and deceptive trade. This is how Cross double-crosses his readers and listeners to protect his paymasters’ monopolies. “Silence is often evidence of the most persuasive character.” Cross’s silence about me personally is “most persuasive” of devil-doing.

“Without going too far down this rat hole,” Cross concedes, “this theory says that tuning all music to 440 Hz turns it into a military weapon.” That is a reasonable conclusion based on the history and scientific facts that Cross’s “silence”-omissions and misrepresentations–conceals. Evidence most persuasive of his multi-national corporate conspiracy to distress and physically damage listeners that is most profitable to Cross’s paymasters.

“I quote from one of the many online articles on the subject,” Cross wrote, again without ethically providing professional attribution to yours truly whose works sourced all of these “many online articles.” “The monopolization of the music industry features this imposed frequency that is ‘herding’ populations into greater aggression, psychosocial agitation, and emotional distress predisposing people to physical illnesses and financial impositions profiting the agents, agencies, and companies engaged in the monopoly. . . . Whoa, Cross balks.

“Going a little deeper,” in fact very “little” because Cross is not a “deep” thinker, “we end up at the doorstep of the Nazis. It is said that propaganda minister Joseph Goebbels insisted that on 440 Hz tuning in Germany because he believed it made people think and feel in specific ways, making them ‘a prisoner of a certain consciousness.’ And if you’re trying to mobilize the population for Der Fuhrer, that’s exactly what you want, right?”

Cross continues disparagingly, “There’s more from the Tinfoil Headphones crowd: “The powers that be are successfully lowering the vibrations of not only the young generation but the rest of us as well. These destructive frequencies entrain the thoughts towards disruption, disharmony, and disunity. Additionally, they also stimulate the controlling organ of the body — the brain — into disharmonious resonance, which ultimately creates disease and war.”

“There’s something to think about the next time you pop in some earbuds. Does listening to music make you feel more warlike and diseased?

For his grand finale, Alan Cross invites you to test the “feeling” difference between music recorded in A=440Hz compared to the same tracks remastered in 432Hz. He purposely neglects the same invitation comparing A-444Hz to A=440Hz. Unfortunately, the 528Records.com site that permitted such a comparison was hacked and the comparison link decommissioned.

Cross’s duplicitous question, “Any feelings of war or disease yet?” is followed by a downright lie. “I’ve also been told that the different effects these frequencies have on our chakras. Songs tuned to 440 Hz work on the third eye chakra (the “thinking”) while 432 Hz stimulates the heart chakra (the “feeling”).” The lie is 432Hz doesn’t stimulate the heart chakra. According to substantial research and reasoned analysis, 432Hz balances the sacral chakra, not the heart chakra. Notice Cross’s lie once again fraudulently conceals 528Hz which is, in fact, associated with the greenish-yellow heart chakra in Oriental medicine.

“Therefore, 432 Hz music increases the spiritual development of the listener. It may even have healing properties,” which is why I composed the sacral chakra music video therapy program in 432Hz. You can listen to the trailer demoing the complete set of music video for chara system balancing using the appropriate natural frequencies by clicking the banner below. 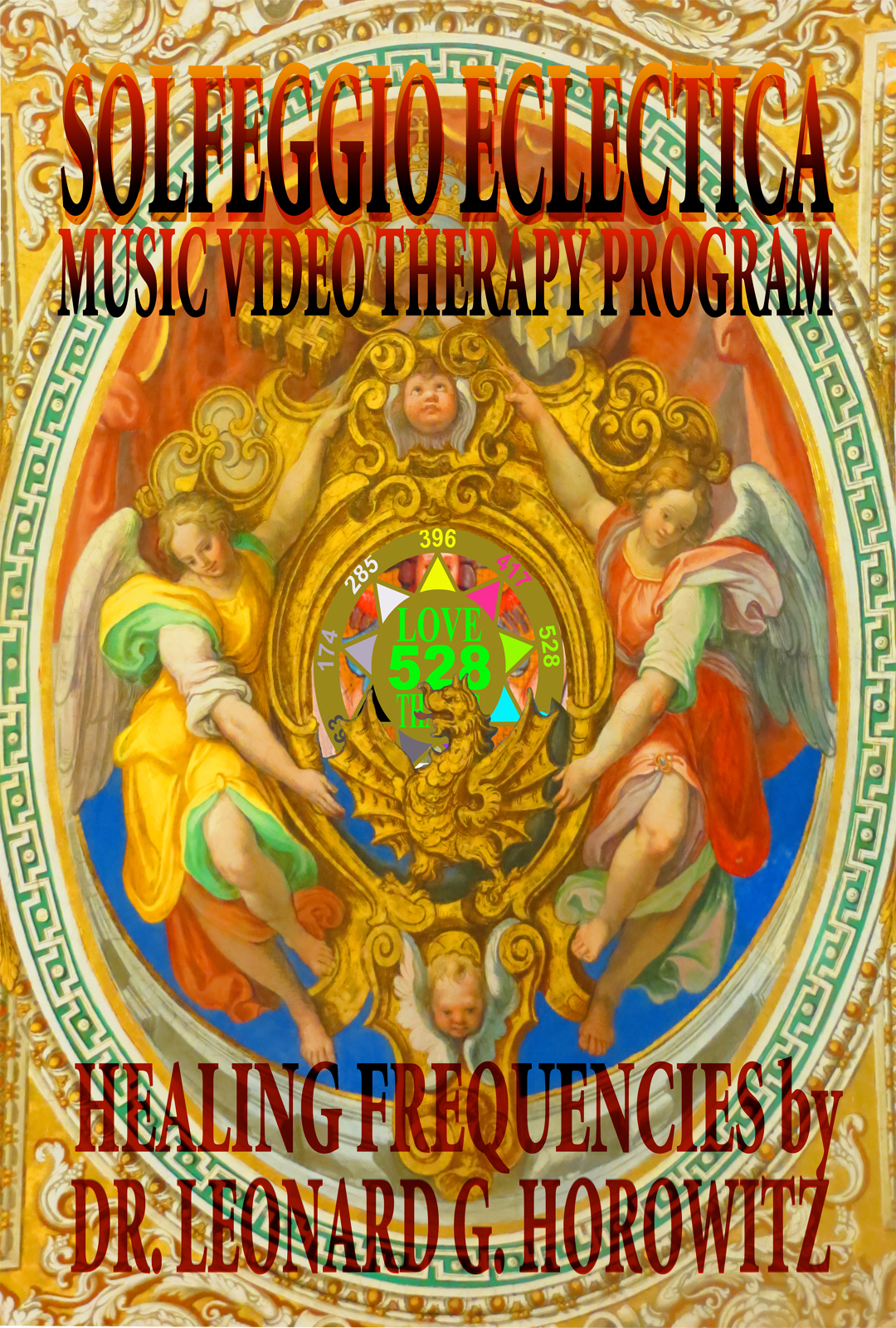 Alan Cross concludes by revealing his real double purpose for his corporate-controlled assignment to bury A=444Hz/C=528Hz and divert to 432Hz. Here is how he ends:

“There are numerous organizations advocating a universal switch to 432 Hz, but that would involve upsetting worldwide standards, not to mention the construction and re-tuning of millions of musical instruments. Nice idea, but it ain’t gonna happen.”

“Upsetting worldwide standards” is obviously opposed by Cross for his paymasters’ “damage control.”  And Cross’s diversion to 432Hz is supplemented by his final statement, “If that idea stressed you out, please meditate on this special 432 Hz music.”

He then encourages readers to view a nice video that unfortunately does not provide music made in 432Hz. BIZARRE! “This video uses a 432Hz frequency tone mixed with the music (the music itself is in standard tuning),” reads the honest description on that video viewed by more than 14 million people online.

But for people who want the “real deal,” music videos made in the actual healing frequencies of nature. Click the above banner, and read the product description to set Alan Cross’s bullshit aside.